​THE KITCHEN AND GARDEN 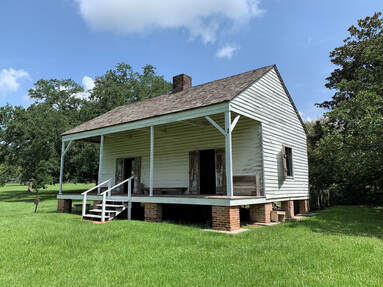 ​There are no available research documents to tell us what the slave cabins on
Magnolia Mound were like.

In 1993, a double slave cabin was constructed based on three slave cabins moved
​from “Cherie Quarters” on River Lake Plantation in Pointe Coupee Parish.

This circa 1830 slave cabin has two furnished rooms with a chimney of brick, and windows with shutters.

Excerpt from: “Beyond the Big House, A Magnolia Mound Tour Exploring Colonial Slavery in Louisiana 1800-1830” by Kay Harrison & Wanda Barber

"We know very little about Armand Duplantier as a master; we know nothing about the disposition of his various overseers. Every individual was different. The slave owner could strive to be thought benevolent by his peers in his treatment of "his people," or he could be merciless in extracting every margin of profit from his labor force at the cost of their dignity and well-being. He could be the kindly "massa" and have a bad day. The slave was equally an individual, but he was in bondage, property rather than personality.

Usually one room meant one family, occasionally two. Crowding was not always the fault of the master, for the slaves took in orphans, old people, or single friends rather than see them confined to a barrackslike atmosphere. Usually there were no partitions, but certain spaces were clearly designated for sleeping or eating, etc. Concerned with privacy, slaves, if they had the opportunity, did work to build lean-to extensions to their cabins, or lofts, or simple partitions. (G,ED-RJR, pg. 524)

Occasionally slaves enjoyed a cast-off chair or table, but more often sat on rough benches or three-legged stools, a form of seating known in West Africa. Clothes hung from pegs in the wall. Hollowed-out gourds might serve for storage or as individual bowls, there might be a few scavenged utensils, i.e., a cooking pot and a skillet, broken pieces of pottery or clamshells for spoons and knives. Light was usually from the fire which they made every effort to keep going since rubbing flint rocks together for a spark to catch cotton lint was difficult and time consuming. Some slaves made candles, but it was difficult to collect the tallow or find the time for candle-making. It was easier to use pineknots or rush lights."

​Bennet H. Barrow, a slave owner in St. Francisville, copied his Rules for Highland Plantation in his diary in 1838. He wrote "I give them cloths twice a year, two suits--one pair shoes for winter every third year a blanket." p. 409.

​The majority of slaves on large plantations usually lived in little villages some distance from the big house, but within sight of the overseer's house. Given the chance, slaves preferred cabins in secluded places, or failing that might choose to build their cabins at odd, irregular angles from each other. Owners preferred straight rows on either side of a "quarters road." When improvements were urged, planters seemed to be more concerned with appearance than with the health of their slaves. The answer was whitewash, which might encourage cleanliness, but the chief virtue was "the cost is almost nothing." There are countless references to how "dirty" or "filthy" the cabins and their residents were. The cabins were cramped, insects were impossible to control, poultry and small animals had access to the building, the floor might well be dirt, the opportunities to wash were limited, but more than anything else the people worked from before sunrise to dusk. A clean, neat cabin was probably a herculean effort. Some worked at achieving the neat cabin; others concentrated on the community brush-arbor or praise-house. (G,ED-RJR, Pg. 528)

“Those who are employed in agriculture on the plantations are treated more uniformly. They are housed not far from the master’s house in a little house or cabin perhaps a dozen feet square. Each cabin is provided with a hearth on which to cook meals, for the masters do not concern themselves with the details of their food preparation. These houses are constructed of squared posts six or seven feet high planted in the ground about 2 or 2 ½ feet apart, the intervals between these posts being filled with Spanish moss.
These cabins are covered with long slabs of cypress called pieux. In a few days these simple building are complete. On most plantations where the masters take care of things, all the cabins are aligned and spaced regularly. It looks like a little village and is usually called a camp. The master’s house at some distance apart dominating these humble cabins by its greater size and elevation brings to mind feudal times, when the haughty chateaux of the seigneurs looked out over the miserable huts of the serfs. There are even plantation houses with keeps, complete with muddy waters. The difference between those slaves and the slaves of today is, that their slavery is more abject, and their lot will only be alleviated by the passage of time and revolutions. Where, then is this progress of the human spirit?
Not all the Negro cabins are constructed with the same care. That depends on the capacity, the indifference or imperiousness of the masters. One finds them sometimes scattered in confusion around the principal house and instead of a tight mud wall, the walls may consist of only badly made slabs, leaned against the posts through which the winds are rains penetrate at will. It is not astonishing to learn that there are indifferent and lazy masters who are almost as badly housed.”

I retired to the cabin extremely tired, and having cooked a supper of bacon and corn cake, and conversed a while with Eliza, who occupied the same cabin, as also did Lawson and his wife Mary, and a slave named Bristol, laid down upon the ground floor, little dreaming of the sufferings that awaited me on the morrow."

"The softest couches in the world are not to be found in the log mansion of the slave. The one whereon I reclined year after year, was a plank twelve inches wide and ten feet long. My pillow was a stick of wood. The bedding was a coarse blanket, and not a rag or shred beside. …The cabin is constructed of logs, without floor or window. The latter is altogether unnecessary, the crevices between the logs admitting sufficient light. In stormy weather the rain drives though them, rendering it comfortless and extremely disagreeable. The rude door hangs on great wooden hinges. In one end is constructed and awkward fire-place."

​"It is the custom in Louisiana, as I presume it is in other slave States, to allow the slave to retain whatever compensation he may obtain for services performed on Sundays. When a slave, purchased, or kidnapped in the North, is transported to a cabin on Bayou Boeuf, he is furnished with neither knife, nor fork, nor dish, nor kettle, nor any other thing in the shape of crockery, or furniture of any nature or description. Whatever necessary article of this nature is found in a cabin has been purchased with Sunday money."

An original outbuilding; home of the manager of Magnolia Mound, 1871-1900s National Register of Historic Places
The sole remaining original outbuilding of Magnolia Mound is this one-and-a-half story Creole style cottage located in 1977 at 2530 Vermont Street. An 1880s map of the plantation was used to locate any surviving structures, and this building, identified as the “caretaker’s cottage” in early deed records was the only building discovered.

In 1978, the Friends of Magnolia Mound purchased the house, and arranged for its move to its present site on the Magnolia Mound Museum grounds. Using architectural evidence and an early photograph, the building was restored to its original appearance with the reconstruction of its porch, restoration of windows, and replacement of one fireplace mantel (copied from one surviving original). 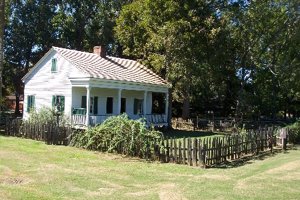 Originally interpreted as the “overseer’s house,” architectural and historical research proved that the house was not antebellum (built before the Civil War) but was an 1871 replacement of an earlier building that housed Magnolia Mound’s overseer. This building was constructed following the destruction of the original, during a devastating tornado which tore through the property in May 1871, and that also claimed most of the original slave cabins. (Damage was so extensive in Baton Rouge that the news of the tornado was reported in the New York Times.)
​
The house was built according to earlier styles, favored by the Acadians and Creoles –without any central hall. It included an engaged porch, and two smaller cabinet rooms in the rear. The two principal rooms share a single chimney, and the smaller cabinet rooms are unheated. Originally, a separate kitchen, and service outbuildings were conveniently nearby.

According to the 1870 and 1880 U.S. Census, this home was occupied by Benjamin F. Brooks and his family. Brooks was employed by the firm that farmed Magnolia Mound as a sugar plantation following the Civil War. In 1880, Brooks’ family included his second wife Mary, two daughters by his first wife, Inez and Eliza, and three young children by his second wife, a sister-in-law, and a young white girl who was their paid house servant.

A descendant of enslaved people, Mrs. Susie Martin White, born in 1894, lived in the house until she died in the 1970s.

Cherrie Williams, granddaughter of Mrs. White, attended elementary school nearby and visited her “Mama Susie” frequently at the “Old House.” Mr. Williams recalls, “…in the winter Mama Susie mixing up the wheat paste on the stove that she used for applying the newspaper to the weathered walls to keep the chilly air out and the warmth of the fireplace in. I would watch as she sat in her rocking chair with her tobacco pipe, singing hymns and praying softly, and weaving pieces of scraps together to make quilts, aprons, hand-made dolls and doll clothes…” “Who would have known that the house where I received such comfort and warmth from my inspirational grandmother dated back to 1870?” “The house rested in the shade of low hanging trees that kept it dark and cool. But perhaps the shade trees of yesteryear were what created the spooky night images I remember.”

“It is now a part of history known as the Manager’s House. But I know it as the ‘fun house’ where the aroma fresh Indian fry bread, slow cooked beans and rice, farm-fed smothered poultry, and garden-fresh mustard greens permeated the rooms; where I took turns churning fresh vanilla ice cream to go with her homemade jelly cakes….and where I watched her concoct her natural remedies and teas from herbs and bark.” This is where I learned to be very creative, an artist, while I watched Mama Susie sit, sing and weave pieces together to give away for gifts.”
SUBSCRIBE TO OUR NEWSLETTER
BECOME A MEMBER