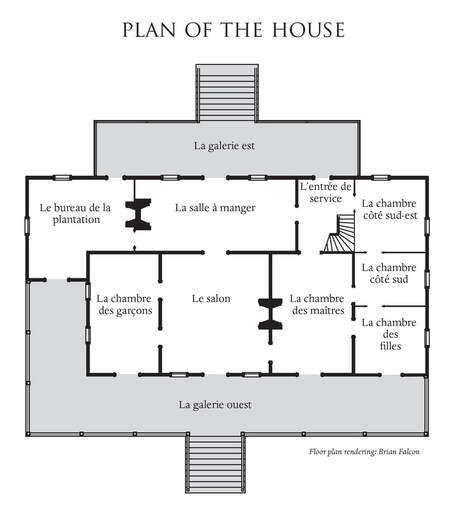 The Friends of Magnolia Mound with the expertise of Curator H. Parrott Bacot assembled the collection of furniture and artifacts to represent the life of the early 19th century French and Creole family: the Duplantiers.  Early research focused on the lives of the occupants of the property from 1790-1827: builder John Joyce, his Creole widow, Constance Rochon, and her second husband, Armand Allard Duplantier, a French émigré and associate of the Marquis de Lafayette.  Early archeological excavations on the site located the site of the kitchen dependency (subsequently reconstructed) and artifacts provided valuable information on the ceramics used in the house.  Contemporary wills survived from the Duplantiers, but the all-important inventories of household items were missing from their succession (probate) files at the East Baton Rouge Courthouse.  Fortunately, a nearly contemporaneous inventory survived from the estate of Armand Duplantier’s uncle, Claude Trenonay of Pointe Coupee Parish and provided the context of decorative furnishings in a typical Creole plantation.  Additional local inventories of Duplantier contemporaries of similar wealth and backgrounds were also used to develop a furniture plan for the Magnolia Mound historic house.  Later, scientific paint analysis determined original exterior and interior paint colors and subsequently, a professional restoration architect completed a historic structures report to consolidate and synthesize all available historic documentation to guide a more complete restoration. None of the furniture in the house belonged to the Duplantiers but they are from the museum period of interpretation that goes from the late 18th century to about 1830.
LA CHAMBRE DES GARCONS
​The furnishing of the house follows the traditional hierarchy within the public and private spheres, and within the family.  The boys’ bedroom was a more private, family space.  It was originally two small rooms.  The beam running north to south demarks where the room was partitioned.  The east wall has intentionally been left uncovered so that the bousillage entre poteaux construction can be seen.  Boussillage is a mixture of mud and Spanish moss covered with plaster.  All the furniture in this tertiary room except the child’s “campeachy” chair was crafted in Louisiana.
LE SALON
​The most important room of the house besides the dining room is the parlor or salon.  This cove ceiling done in tongue and groove boards was part of the remodeling of the house done by the Duplantiers.  It is the earliest surviving one done in the entire Mississippi valley.  The woodwork in this room that include the molding, the rosette above the chandelier, and the chimney are well crafted pieces of woodwork and a nice combination of French and Anglo-American style.
LA CHAMBRE DES MAITRES
​The fourth room of the original 1791 house is the master bedroom.  Following the hierarchy within the family this bedroom has finer furniture than the boys’ bedroom.
LA CHAMBRE DES FILLES
​This section of the house was part of the gallery that was closed in to add more bedrooms.  This bedroom would have been the girls’ bedroom as it is close to the parents.  Once again following the hierarchy within the family, this girls’ bedroom would have had nicer furniture than the boys’ room and the two other ones.

​The middle room features the only chest of drawers in the entire house. Inventories showed that the Creole preferred to use armoires.  In the early 19th century the Anglo-American type of chest of drawers became more popular. This one is a Massachusetts example made in the Sheraton style.

​The stair leads to an attic which was used for storage and acts as an insulator for the living floor below from the torrid heat of the Deep South’s long summers.

Situated across the middle of the rear or eastern elevation of the house in one of the typical Creole plans, the dining room is the second most important public space in the residence.  The concept of a separate room for dining had only evolved in Europe in the mid-eighteenth century and was just beginning to become common in early nineteenth century America.  As in the salon the ceiling is composed of tongue and groove boards and there is a wooden cornice in a continuous lozenge pattern. ​

Abutting the dining room on the north side is a space that has been designated as the office/bedchamber. ​
SUBSCRIBE TO OUR NEWSLETTER
BECOME A MEMBER